Most of you know we lost our second son to a stillbirth when he was full term.  It’s still not something I have told the full story of on my own website – it was the darkest and saddest place I have even known. As a woman, I felt dead inside.  I was numb for so long and when my mind drifts back to that broken place and that feeling inside, it makes me shudder.

I am inspired to write about it when I talk with others who have lost a baby.  I frequently get emails from people who have either lost their own baby or who know someone that lost their child to a stillbirth – one of the most common things they ask me is how they can support their friend or loved one.  As I talk with them about this, I share being in a support role is actually a very hard spot.

A spot where you don’t know what to say.

A spot where you see a loved one hurting so deeply that you want desperately to take that pain away.

This spot is a tricky one because when we don’t know what to say (and we are all guilty of this at some point) – we say the worst things. 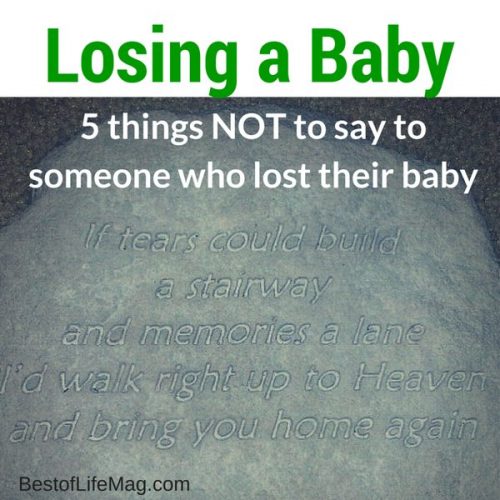 While I can’t tell you what to say to someone that lost their baby to a stillbirth, I can definitely help you figure out what NOT to say.  Because I heard them and they hurt. Badly.

Geez, you think? I believe in God but I will admit that after losing two babies to a miscarriage and then losing our son to a stillbirth, I have my moments where that faith is tested.  Whether the person who lost a child believes or not, they know first hand God had other plans.

Those plan?  They suck. And it’s okay to feel that way for however long we need to.

There are many reasons that a stillbirth can occur, but don’t assume you know them.  In our situation, I had a condition with all of our babies called Polyhydramnios.  I measured like I was having twins because my body produced twice as much amniotic fluid.  I could barely feel our babies and had told our doctor just a few days before Jaxon passed away that I felt like the fluid was too much pressure and that he needed to come out.  She said no. I trusted her. He died four days later from cord collapse from the pressure of the fluid.

It was meant to be.

3. “Something must have been wrong with him (or her) that you couldn’t see.”

Heaven just got another Angel and the image that parents will forever see in their heads is a beautiful perfect baby.  No matter how old the baby was when they got their wings or struggles they faced, they are complete perfection.

Let the parents hold tight to that forever…

Our oldest son’s balloon to Jaxon on his 4th Angelversary.

No one knows that and the statement minimizes the feelings of the parents.  The potential that he or she did suffer will most likely be something that the parents struggle with.

I know we did…and we still do.

5. “Well, you can always have another baby.”

This comment again minimizes value of a real baby, a real life, and a real loss.  You simply cannot replace one baby with another.  Plus, remember that everyone has a story and we never know it in its entirety.  Maybe they can’t, maybe this was their last chance, and now they are struggling to deal with those emotions as well as the ball of emotions that comes from losing a child.

The decision to have another child after a stillbirth belongs to that of the parents and them alone.

I think the important thing to remember is that when someone loses a baby, there really isn’t anything to make it better.  My advice?

Be okay with quiet.

I deeply appreciated people that were just willing to sit with me and let me cry. Ones who would let me tell them about him – because he was so real.  I held him, I caressed his head, I felt his hair between my fingers. And I was so scared of losing those memories because if I lost those – well, I would have nothing left of him.

Nine years later, I can say that time did heal our hearts. The hole is filled, but it is heavily scarred. It’s one of those holes that looks a bit uneven from the surface because the loss of a child can never be made completely better.